On the city buses there are four seats that face each other in pairs. They are reserved for the elderly, the infirm, the pregnant and the very small. At 10:30am the bus is full of retired folk making their way about their business before it gets too hot. To claim one of four seats, citing the category of “elderly”, at this time of the day, one needs to be pushing ninety and have skin like tissue paper. One such lady is sitting next to Clara in the four seats and Clara is staring at her aged face and boney fingers wrapped around her walking stick side on, with the intensity of an inquisitive six year old. We are on our way to the pediatrician. The lady starts to chat to her and pulls from her purse an old picture of her granddaughter in her first communion dress.

Two days ago I was sitting outside a small café while my friend Maxim showed me old photos posted on a Facebook page run by an association of the neighbours of San Bernardo. He was convincing me to become involved with a collective. The objective was to create some projects in his adopted neighbourhood, a gentrified, dormitory suburb, with the view of raising awareness of its history and asking for the old closed down school to become a community centre. The school had been occupied by Okupas for years and the early twentieth century brick building is now in a state of decay and abandon. 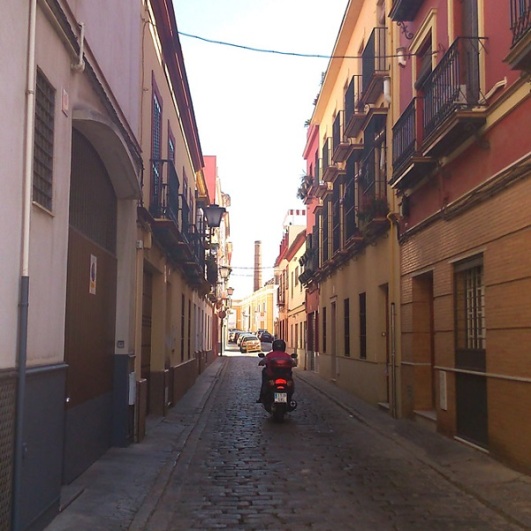 Developers and architects came in during the naughties (2000-2007) and snapped up old houses for renovation and conversion into luxury inner city homes before the economic crisis hit. 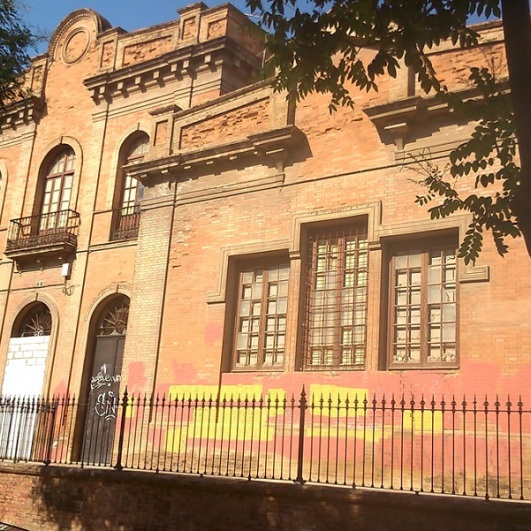 Maxim is the grandson of a communist who fled from Seville to Russia after the Civil War to avoid labour camps or being shot. Social activism runs in his blood. I’m the descendant of New Zealand blue voting farmers. My granddad would be turning in his grave. I grin to myself.  We had just gone for a walk around the small neighborhood discussing its change over the last century. As water history is an interest of mine, the moment I entered the neighbourhood from a main arterial route that ran along the old train tracks, I had been observing how low it dropped down and had started thinking old river beds.

San Bernardo was a working class neighbourhood that made up a band of poorer suburbs that stretched around the outside of the old city wall for centuries. They lived off horticulture or fishing in the rivers, enjoying three rivers that join the great Guadalquivir right where Seville is located. Many were living in the typical communal houses of the poor of which there were many in Seville. About a hundred people would be crowded in to a possible two floors of one roomed dwellings, sharing a central patio, a water source, toilet and kitchen. In 1970, 74 such corrals still existed but the vast majority had been knocked down.

By the nineteenth century, artillery and pyrotechnics factories had appeared in San Bernardo, and an abattoir. The railway opened in 1860. The river Tagarete that passed by the neighbourhood was covered over to avoid further outbreaks of yellow fever given the festering state it was in passing by so many homes and an abattoir. Everyday thousands of people would pour out of the factories in their blue boiler suits to have breakfast in the bars of San Bernardo.

Then factories began to close down or relocate to further out of town. People moved. Poverty, that had never been far away, returned. Houses that weren’t maintained by their landlords became unlivable. Then lack of work and the civil war further displaced people. The railroad closed. 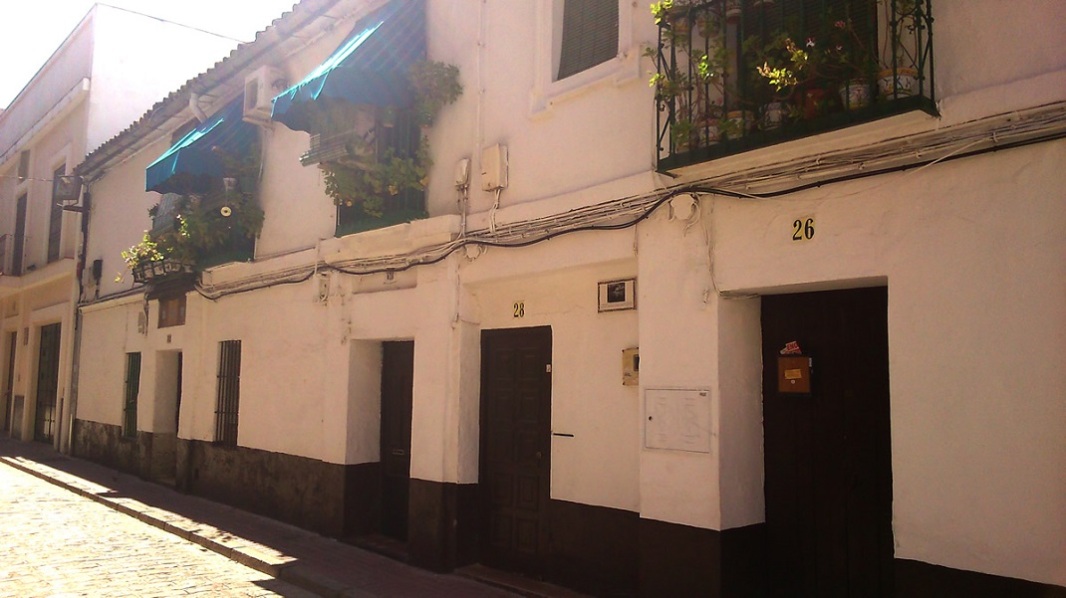 Then in November 1961 the river Tamarguillo broke its banks and flooded the city, affecting a quarter of the population, including San Bernardo. 13,000 houses were evacuated and 25 refugee camps were set up around the city to deal with the suddenly homeless population. The most affected were naturally the 17% of the population that were living in substandard housing in the poverty belt around the old city wall – some 40,000 people. Old communal houses were damned and hundreds of families were forced to live for years in cramped conditions in camps while building projects moved as quickly as they could to rehouse them. When the projects were completed, families were given keys to individual homes in high rise blocks scattered about in new housing developments. While communities were separated, social fabrics torn and many missed the nights of sitting around the fire together in the patio, singing and telling tales, others found their newfound privacy, hot running water and flushing toilet a godsend. They could also protect children from abuse that was rife in communal houses.

The old communal life was over.  Rivers were pushed underground or diverted away from the city to form a system of manmade concrete canals in no-mans-lands.

Clara and I finish with the pediatrician. It’s getting hot, it’s Friday and I figure, what’s the point of dropping her to school now?

“Clara, see that arch there in the remains of the old city wall? And the basilica? Um, church? Do you want to go inside to have a look?”

Clara shakes her head. Then asks,

“Are there candles?” she inquires.

The Basilica of the Macarena is a young building from the 1940s lovingly maintained and covered in Mannerist style painting, gilt and marble. There is contemplative music playing and it’s darkened and cool. In front of us is the Virgin of the Macarena. Her tiny figure is decked in lace and heavily embroidered velvet robes and a massive cape. She has a huge golden crown and wears some emerald and diamond brooches, donated by the late Duchess of Alba, at her throat. If she were real she would be crippled by the weight of everything she’s wearing. She has five crystal tears, looks mournful and faces out to the north.

Beyond the front doors of the church lies the neighbourhood of the Macarena.  In times gone by it formed part of the poor suburbs and shanty town that encircled the city. Today, it’s still home to the working class folk that adore her, only more decently housed. In this neighbourhood, she is the centre of attention. She owns this place. She is the Earth Mother, Great Mother, The Queen of Heaven, she who feels our misery, she who intercedes. Her son plays a secondary role off to the side in an alcove.

Clara stares at him disapprovingly, with her chin tucked into her neck. She doesn’t like Jesus, he frightens her. She turns away.

“Mummy, what is everyone doing?”

“Watch them and tell me what you think they are doing:” I reply. The church is busy with tourists and the devout coming and going.

“They’re just sitting and LOOKING at HER” Clara replies. “They aren´t praying.”

“What’s praying supposed to look like?” I ask. Clara puts her hands together in front of her in the prayer pose as she has been taught by the nuns. Clara turns back to look at the figure of Jesus.

“Does he look dead?” I reply. She observes that his hands are tied.

To change the morbid mood I try to get her to fix on another statue of Mary holding baby Jesus.

“Look at that Virgin, what’s she carrying?”

After some thought Clara observes that the baby is very still, like a doll, so maybe.

We wander out an old door to light a candle for everyone she can think of, including her best friend Lola who tells lots of porkies. On the way out we pass a coke vending machine and a machine that you put money in to get a medal with the Virgin on it. No change given.

Down in Calle San Luis, we find a bar offering toast all day. We order toasted buns drizzled with olive oil and sit happily munching away. Virgins and Christs stare down at us from wall calendars and Holy Week posters. We are in the heart of the folkloric city.