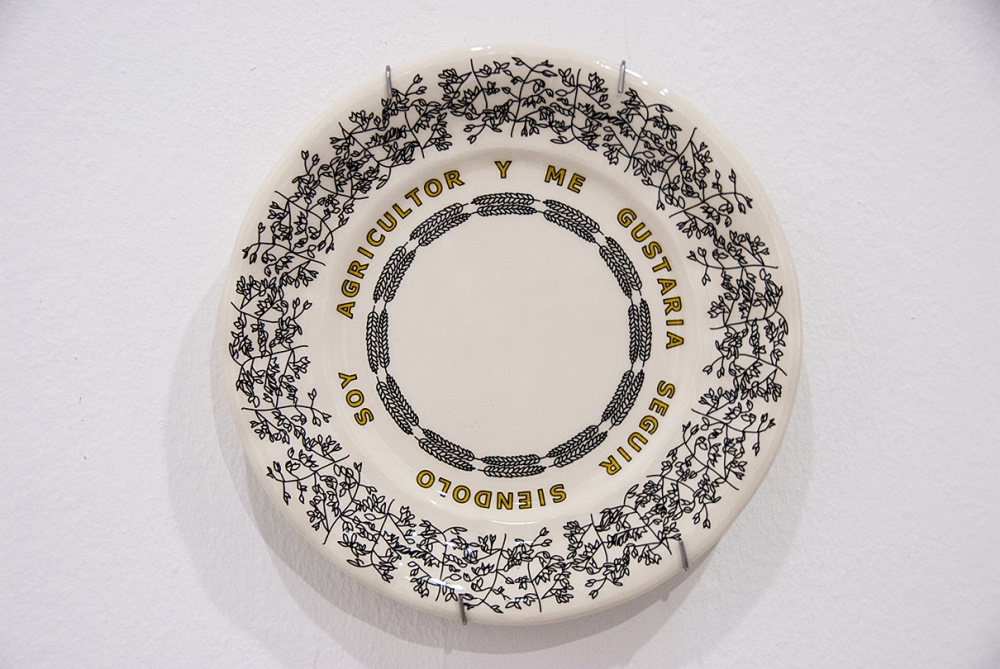 August, Seville. There is something wrong with the trees. I was walking back home when I smelt dry grass clippings, like the hot sunny day after the lawn has been mown and no one has collected the clippings. I am in a concrete metropolis, this is an odd smell. I look down at my feet, there lies a carpet of drying green leaves. Odd. It’s summer. I look up at the two trees. It seems as if they have had a fright.

I walk on. I feel sorry for the trees. I bet no one is noticing their distress. The city is deserted. Everyone is at the beach. As story-tellers, or artists, we are observers of detail, or at least, I think we should be. Moved by the small things that find their way into our consciousness, the cracks in a veneer, a shift in the ordinary appearance of things, the current beneath. Then again, we are drawn to make work about the apparently ordinary. How to bottle sugarbeets or our walk to work. The nature of things. We make work about them, write about them, connect ourselves to them.

The American painter Hans Hofmann invited Pollock to study with him and work more from nature. Pollock replied: “I am nature.”

The word ‘nature’ is over 5000 years old but has only been used in the English language for 700 years. The way we think of it today, and employ it to describe the world outside of ourselves and outside of the things we construct, is very different to how it was used only 150 years ago.  It was adopted from Old French and originally meant, ‘course of things, character, the universe, and birth’.

A week earlier in Berlin. We are two stops from the end of the line. I have this unbroken view down to the end of the underground train. It’s like being in the neo-lite insides of a worm that is curling and curving its way through the dark earth. I’m quite tired. I may not be blinking. The view is suddenly broken by an African guy who steps in wearing a black and white striped jacket, stove pipe pants and white rimmed eighties sunglasses. I blink. He’s pretty cool. The nature of Berlin

I wasn’t much taken with Berlin during my first two days there to be honest. We were staying in an old Turkish-now-hipster neighbourhood: Guys with beards and bare feet, girls with short blunt fringes that they just hacked at that morning in the mirror. Second hand shops, start-ups and up-cycling, co-workings and cafes every second window. Yeah, yeah, the zeitgeist. Cool young things sitting in the cafes with their milch-kaffee, on Facebook, twitter or instagram et al. uploading the carefully scripted narrative of their lives.

By day three I was feeling better. Neuköln and Berlin were kind of growing on me as long as we stayed away from Potsdamer Platz (crowds, long distances on foot, crowds). It was the last stop on our month long trip around Germany with our two small children.

After these first few days, we found ourselves ready for a trip out of town to Rosenthal Nord where German artist Antje Schiffers and Thomas Sprenger, her partner in life and art, have their allotment. They were camping there a few days before taking off for the Baltic Sea. We had been invited for cheesecake. When we arrived, Iwan their son wanted to know if my girls could play football. Well of course they did, though we weren’t going to go into the details of the world cup as rumour had it that Germany had won. A game ensued where the only common language was “Goal”.

That left us older ones to talk about other things under the apple trees. For the past fifteen years, Antje has travelled to small villages across Europe and beyond, with a project to compile footage of contemporary farming. It began in the late nineties in Mexico where she completed her masters. Chicahuaxtla (Mexico), is a community living at 3,000 metres above sea-level. She started drawing the plants there and little by little the locals began telling her their uses – “This one is bread flower and it’s useful for the stomach ache of a baby” reads a small sheet of paper typed with an old type writer next to a drawing from this period of her work. She also gave them her camera and the village set about photographing themselves.

Antje feels drawn to the stories of others and her farming roots draw her to projects that tell the stories and disseminate the knowledge of the people that above all, cultivate and produce food. But that won’t stop her from seeing the qualities of an exercise to have her business as an artist assessed by a business consultant in exchange for a painting. Her art is her life, her life, her art.

The farm project objective is refreshingly simple: in exchange for a painting, the farmers make a film about their life and their farm. She gives them a few tips on shots and how the camera works and leaves them to tell their story their way. How she then presents the resulting narratives covers a wide range of media, from murals, to books, installations of the edited videos and a website www.antjeschiffers.de.

Antje also runs projects with other artists Kathrin Böhm and Wapke Feenstra et al. It began back in 2000 when the three artists of farming origins began working together as myvillages.org.  Each went back to their home village to initiate a village-specific art project there. The projects are ongoing and include currently:

Company. Movements, Deals and Drinks
East London: A new long-term arts project to link east London’s history of going hopping and fruit picking in Kent with the ambition to set up a community drinks enterprise.

International Village Show: All villages in one place.
Leipzig, Germany: June 2014 to 2016 the former coach house in the garden of Leipzig’s Museum of Contemporary Art will become the one place from where to follow what’s going on in the villages – that is updates from all the projects they currently have on the go.

Eco Nomadic School
Romania, UK, Germany, France: The Eco-Nomadic-School began in 2011 and organises workshops and seminars with groups who are involved in particular local projects and facilitates a network for trans-local exchange. The Eco Nomadic School is a series of nomadic class-rooms with partners who work on specific local projects in their area, to share and develop knowledge, skills and thinking across a wider European network of organisations and practitioners.

Umeå Pantry Umeå Skafferi
Survival Kit Festival – Bildmuseet Umeå
Umeå, Sweden: This Swedish Pantry is set up with the Bildmuseet and portrays the European Cultural City 2014 over its food. From Sunday Sep 21 – Sunday Oct 19 during the Survival Kit Festival, Umeå Pantry will be filled with donations from local growers and producers, and it is open for guests to pay in kind or whatever they could offer in return.

“The pantry in this sense represents what people can and want to “give” each other. We hope that it will mirror not only the landscape in and around Umeå, but also the local food production network and its consumers. Umeå Pantry also offers an opportunity to reflect on our roles in the food chain. It will serve as a lively meeting place where dialogues about food can take place between consumers and local producers. We aspire for the pantry, while it is being cleared out by our food­-sharing events, to be filled with new ideas, discussions and creative suggestions on sustainable food culture in Umeå.” – http://myvillages.org/index.php?a=work&id=70

Seville September: Being from a farm, Antje can keep a lively conversation going about soil quality to please any farmer and has an innate sensibility for manaakitanga. Her show at : El Centro Andaluz de Arte Contemporáneo de Sevilla in La Cartuja, a small retrospective of her projects over the last 15 years, opened in September. Called “Las Bienvenidas estan en todas las partes – Greeting is everywhere”, she rejected the cool vernissage, with nothing more than a glass of wine offered. Attendees of the opening got to enjoy local produce and eat from a crockery set designed by her and made in Seville that said “I am a farmer and wish to remain one”. A contingent of farmers from a village near Almendralejos had arrived, all spruced up. Antje laughed, she had never seen them all so fancily dressed and stood with them reminiscing from her time with them as they watched their videos of the grape harvest.

I am the daughter of a farmer too. I’m well accustomed to agricultural conversations on how to approach a cow or how many new pairs of mallards are in the wetland. What the pukekos do. What that mother duck is up to in mum’s front garden (no good). And the bloody rabbits. I received an email the other day with an image attached of a crop growing out by a village near Strasbourg. My parents had joined us for two weeks of travel in July that included this brief excursion across the border into France. My father was excited and wanted to let me know what the unidentified crop was. It was Celeriac.